I had a bit of time on my hands, so I decided to try for a 5 day solo trip taking me into new parts of one of my favorite parks in the area, Kawartha Highlands. I had been to the northern sections of the parts multiple times, and nothing out there really had an appealing loop for a 5-day, so I put in on a sunny day mid-week at Long Lake.

Setting out on long lake

This was my first time on Long lake, and while it’s aptly named (took me a bit over an hour and a half I reckon to reach the first portage of the day), it is gorgeous. Basically copy and paste what the western arm of the French river looks like. Sure there are a good number of cottages and boat traffic on it, but that’s more confined to weekends. Aside from an MNR boat heading into Buzzard lake and a few other canoes, it was just me out there. I headed west towards Compass Lake on my way to Triangle Lake, where I was spending my first night.

I met up with the two young MNR rangers as they caught up to me at the portage to Compass, and learned that they were going around to as many sites as possible before the summer rush started in earnest in an effort to clean them up, dig out the fire pits, and generally do housework. They were double portaging as they had to carry chainsaws, shovels, and other bags of goodies with them into the deepest regions of the park. Really seemed to love their job though, and I can’t blame them!

Looking out on Compass Lake from the boat cache.

The portage around Compass lake is marked as two, but it really one large one around a beaver- created pond (you MIGHT be able to get through in really early spring), and it’s just north of 350m. It’d take you over a beaver dam on the south side if you know where you’re going, but I took the route less travelled and stayed to the right along some sloping rocks. I found my way to a boat cache on the western side of the beaver dam and decided to have lunch as I waved to the confused looking rangers. One of the benefits of camping in Kawartha Highlands is that you get cell reception almost everywhere, so I didn’t have to bring a locator beacon to let my family know I was okay while I munched on a pre-made sandwich. Sated, I loaded up the Ewok and wiggled my way through the weeds until I was on Compass Lake.

A strong wind blew me through the genuinely quiet lake and delivered me to Crane creek’s portage. I took this time to remark how different this park always seems from portage to portage. Gone were the cottages and motorboats, replaced by calm and serene waters. The second portage of the day was very steep and downhill, making me cuss as I repeatedly hit the back of my canoe along the ground. I was grateful to be going down, but knew I’d be heading back up the next day. Crane creek is a nice little paddle in June, not shallow or quick, just perfect for a solo paddler in a small canoe.

The large beaver dam on Crane Creek, definitely not a lift over

I lifted over one beaver dam halfway through the creek, but definitely couldn’t over the second. It looked about 8′ tall! Also, it was covered in sharp boulders. There was nothing to it but to portage the short distance around it. Be careful here not to get too complacent in your footing, as small trickles from inside the forest make their way out across the rocks and get quite slippery! Within minutes I was onto Cherry Lake.

Cherry and Triangle lake are very much the same lake (at least in June). The two are “divided” by a narrows that any boat can make it through. I could see lots of little bass playing in the shallow water and threw my line in. I was rewarded with a multitude of little hits, signifying that the tiny fish were too small to actually take my bait. I found my way to site #530 on Triangle lake and began setting up my little vacation spot. 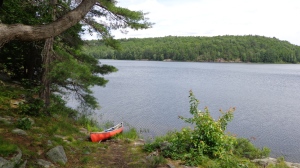 The usual chore of gathering wood I could just about forego because of our friendly MNR staff, who had made it there recently and left me with plenty of chainsawed logs and branches. Life was good as I settled into an evening of chicken and rice and the sun set gently over a scene from a picture book. There were even loons there! As I was chopping up the logs a bit more so as to fit in my fire, I heard a large sound across the bay I was in. It was large enough to lift my head like a deer hearing a gunshot in the distance. I kept sawing. I heard it again, kept sawing. I heard something cry out in pain, followed by a large “chuffing” sound. I’ve actually got it on film, followed by me saying to nobody in particular “well, that’s terrifying”. I renewed my efforts to be as loud as possible while sawing lumber.

I wasn’t bothered the rest of the night though, and turned in for a very fitful sleep knowing that the next day I would be up to the longest walks of the trip.